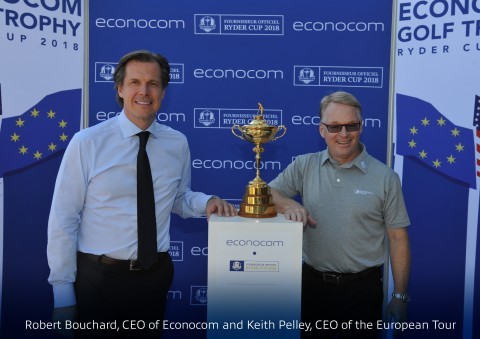 27 June 2018 - Econocom, a leading European player specialising in the digital transformation of organisations, has been announced as an Official Supplier of The 2018 Ryder Cup.

As well as providing a range of hardware products critical to the organisation of The Ryder Cup, Econocom will also become the Presenting Sponsor of the On Course Radio Service for the biennial contest, which takes place at Le Golf National in ‎Saint-Quentin-en-Yvelines, Paris from 25th – 30th September 2018.

With more than 1,500 accredited media on site as well as some 7,500 staff to provide with non-stop information, Econocom will play a key role in supplying laptops for staff in charge of  collating and disseminating data on and off the course as well as printers and copiers in the media centre and The Ryder Cup offices. In addition, Econocom will be the Presenting Sponsor of the live on-course Radio Service which will keep the 275,000 plus spectators up to date with events happening on and off the course throughout the week. The radio service will provide live commentary in both French and English throughout the competition.

Robert Bouchard, Chief Executive Officer of  Econocom Group said: “We are very excited about actively supporting the biggest showpiece event in the world of golf, The Ryder Cup, when it comes to France for the first time in its history later this year. As a leading European digital company, we are proud to ensure Ryder Cup Europe delivers a state of-the-art digital experience and thus contribute to the excellence of this unique and truly international sporting occasion.”

Richard Hills, Ryder Cup Europe Director, said: ”This partnership with Econocom further strengthens our ties with many of Europe’s leading companies that have come together to support and assist Ryder Cup Europe. We are very grateful for their support and look forward to welcoming Econocom to The Ryder Cup in September.”